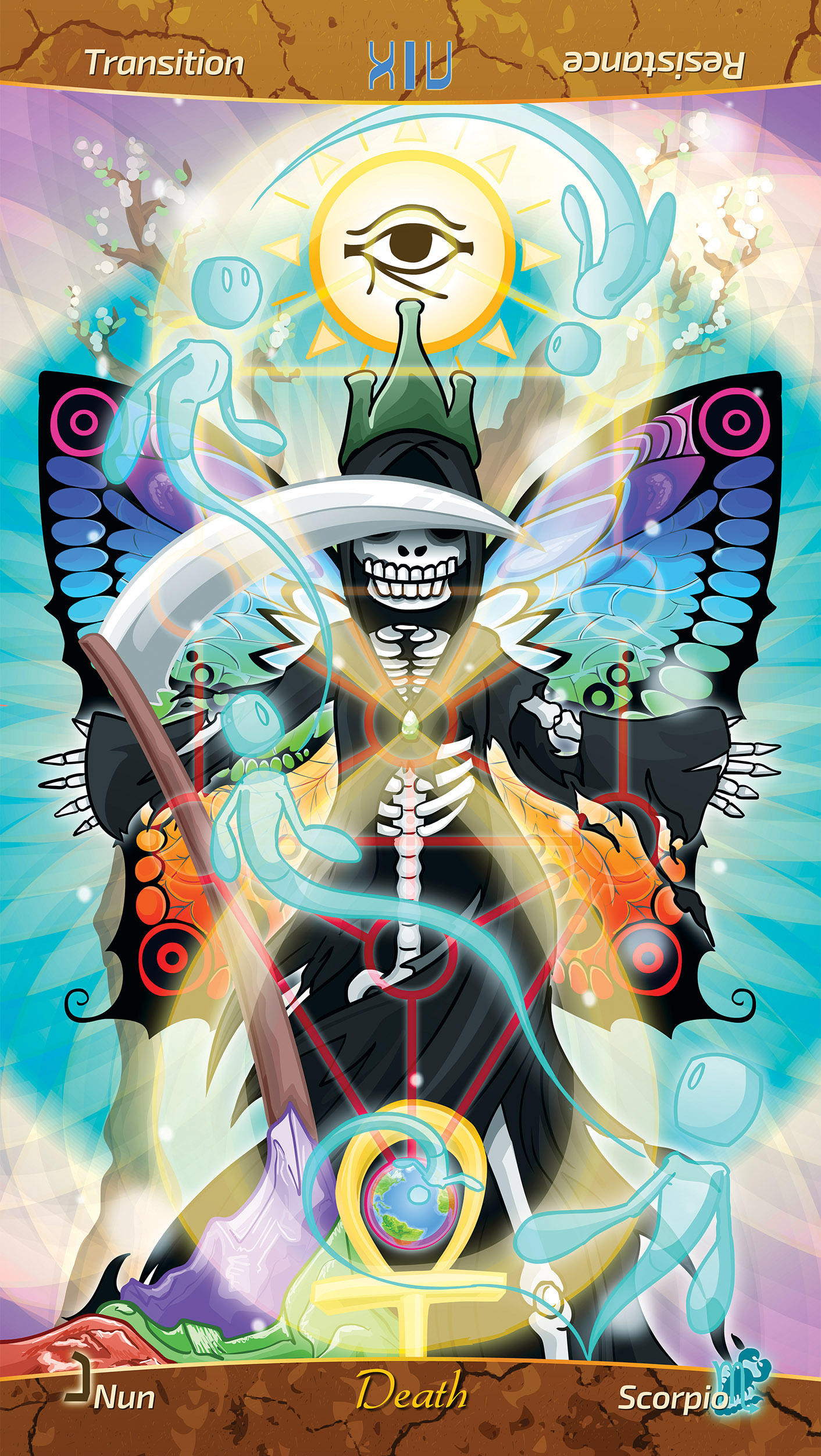 Death appears to invite and beckon new souls through his sphere of creation, around a great lemniscate encircling his body. It all centers around his emerald heart, the hub of purification and renewal, which transports souls upwards into higher forms of awareness, and supports their transition downward back toward the earthly planes below. Though normally very feared, Death is a kind and familiar stranger: we rarely get to know him, but he's always there to help us board the train home.

When you draw Death in a reading, it implies that a great transition is taking place! This is a tremendous time of dissolution, the dissolving of your old self. This could relate to previous understandings, old emotional challenges, mental blockages, or physical behaviors. As you begin to experience this change, you are invited to surrender, to flow with it, and to see where the metamorphosis takes you. Death is a passage, and what awaits you on the other side is a whole new you!

For many, this card is cause for alarm, and along with "The Devil" it can even be a significant reason for someone to find themselves hesitant about the Tarot in the first place. Interestingly enough, when understood, the Death card is in many ways the idea of spiritual liberation and the transcendence of our fears by the passage of inner illumination. This includes the illumination of our fears towards death… or at the very least, the Death card!

The Death card represents the passage of dissolution in the process of transformation. It is a breakdown of personality and identity traits that we have attached to ourselves, and in the moment of realization - the potentials for a new sense of self is born. A very common understanding of this idea is an "Ego Death", where an individual let's go of a lesser part of themselves and in doing so - finds a much greater part of themselves as a result. This leads to a higher sense of purpose and inner knowing, changing the way that you see and interact with the world. In a nutshell, that's Death!  With that knowing, it's not so scary after all, is it?

In this card, Death has been depicted with beautiful butterfly wings to represent the metamorphosis of the self. The caterpillar analogy actually fits quite well to describe this card as well, for entering into the cocoon can be likened to entering a scary black void, but as it emerges on the other side - it has transcended all of its earthly limitations and become something entirely new!

Over the top of Death appears a large lemniscate, the infinity symbol which cycles energy from above and below, meeting and passing through Death's purifying heart, a bright emerald crystal right in the center. Souls are seen traversing the cycle, rising and spiraling around the lemniscate into higher worlds and returning to earth for their next incarnation. This forms the basis of the secrets of death - not as a taker of lives, but the pathway and journey between various states of being and levels of understanding.

Drawing the Death card can imply a number of different things, and as usual, your feelings and intuition will play the biggest role in deciphering what that is. The simplest interpretation is the implication of a fundamental shift in your life. A rather significant notion here would be the allowing of old patterns, old ways of thinking, or generally toxic people in your life to all metaphorically 'die' as you release these aspects from your close personal life, and move forward into something new. Use your understanding of the four elements to navigate your intuition here, does this reading speak to an emotional, mental, physical, or spiritual death? Don't be afraid to draw another card to help you determine this too if you're having trouble coming up with an answer. Further, don't be afraid of the joy of not-knowing! Sometimes, it's exciting to find out by playing "wait and see", but still remember to go with the flow and change when the time comes.

This is one of our favorite cards in the Tarot because the appearance of this card generally implies an exciting feeling of liberation to whatever life event is going on; it speaks to a beginning of a new existence, a new way to live and act, which can be one of the most freeing things there is, especially after living a life that you were unsatisfied with. What's even more amazing about this card are the lessons that it holds for physical death too. When we apply the rules of ego death to the greater spectrum of life and reality, we can see that even physical death is just a doorway to another world. There is always a rebirth at the end of the passage of Death, as this is the nature of creation. With that perspective, Death no longer needs to be something to fear, but something we can choose to embrace with an open heart and mind if we want to.

The reversed side of Death can be likened to all of the aspects of ego which impedes our transition and transformation, and the basis of this "impediment" is simply resistance. When we are resistant to change and hold onto old ways of being, we prolong the transition and often change the way in which it may take shape. Commonly, when we are faced with Death we are often even gripped with "fear of the unknown", or further - denying that what we are afraid of. This stops us from seeing what lies beyond the gateway of this change. It is natural that we can come to resist this passage and cling to the old world which is far more familiar. Yet, this is not a natural state of being, and trying to stop it from happening will only serve to corrupt the body and mind. What's worse, in the end, you still won't escape death regardless; you may as well save yourself the suffering, and embrace it now.

To turn this reversed card upright, Death can be flipped simply by surrendering to what is and embracing the unknown - dive into something new and allow our perspectives to change and our hearts to open. Even when we jump in, the passage through can still be scary, but you'll make it. You can't not make it!

Here is an example to make this more comprehensible: Imagine going to a swimming pool with a five-meter high diving board. If you can imagine to a time when you had never jumped off something that high before and were still afraid of what would happen if you hurt yourself. Knowing that even if you did a complete belly flop from five meters, you are not going to really get hurt all that much, but enough to be scared about it. That is one of the fears that might run through your mind when you are standing there, wondering if you really think you can do it or not.

Let's say eventually you make the decision "I am just going to do it", and you walk forward, and step off. This is now The Hanged Man, who allows himself to "sacrifice the old awareness and descend into a new understanding", and the Death process has already begun. Then, after a second or two, you hit the water - right then and there the part of you that held you back from jumping effectively dies, it no longer survives as you fall those few seconds to your watery grave of new understandings that you can survive a five-meter fall off of a diving board!

Those seconds while you fell and maybe the several seconds that you are underwater before you came back to the surface - that right there is the death experience… And wait for it… because the moment that your head emerges from that water alive - you have now taken the next step on your journey into the next card in the Major Arcana - Resurrection. After that, it becomes easy, because you've done it before! It didn't kill you! Now you can do it over and over without fear.