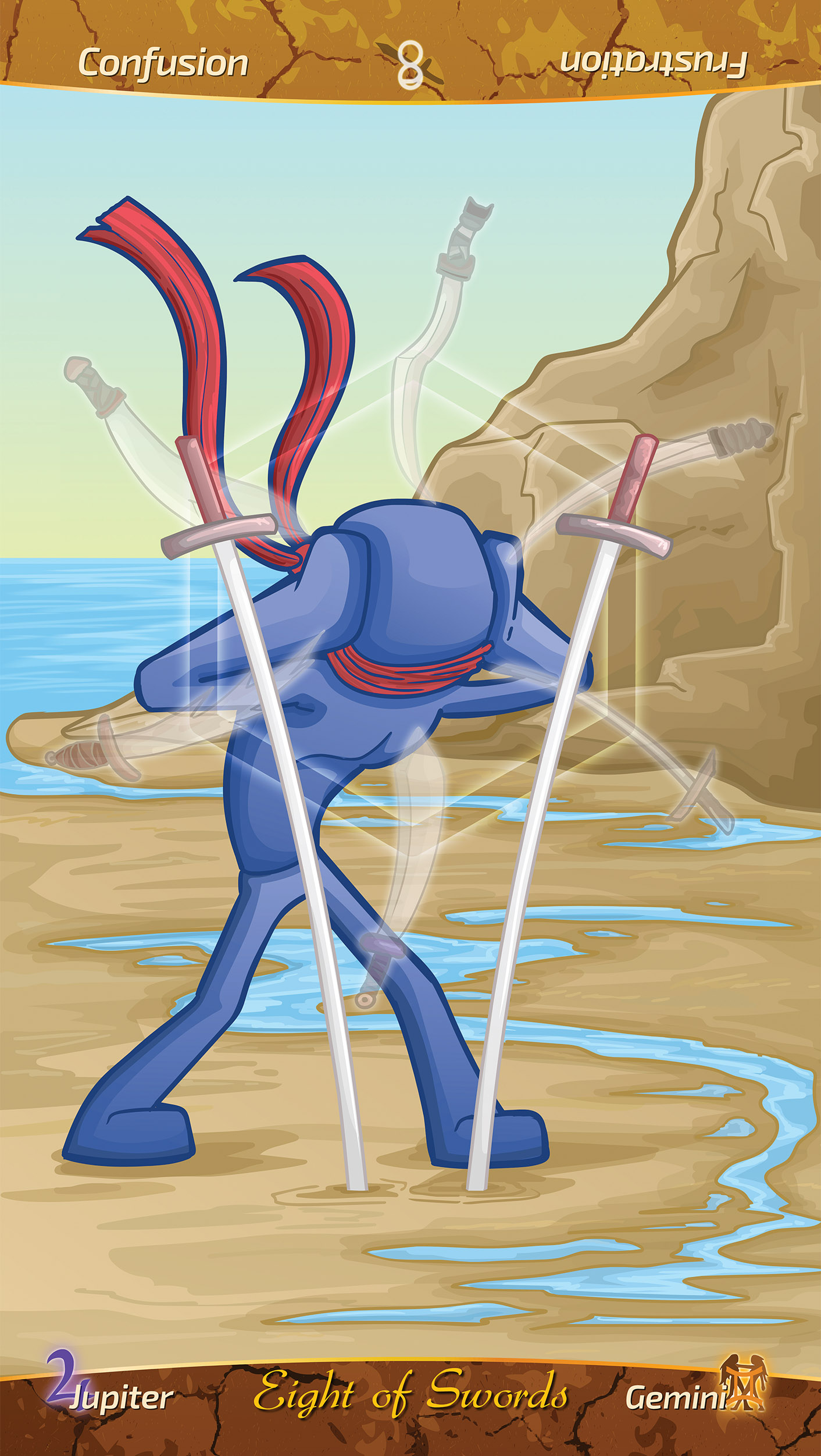 Self-administered confusion is what the Eight of Swords represents, by the very nature of the mind collapsing in upon itself. This is the duel between mental structure and mental freedom, commonly experienced as the duality between the left and right brain hemispheres when they are not in sync. Patchman is blindfolded, and he is unable to see the way out of this chaos, and yet, the pathway is right in front of him. If he could escape his juxtaposed thoughts, he would see the path before he is clear.

Your mind can be a very unstable place, and this card typifies the mind which has reached its tipping point of chaos. Here the duality between your logical thinking mind and your free-thinking and open mind clashes. Her thoughts do not balance each other, but instead, create struggle by their dualistic and opposite natures. Unifying these thoughts does not appear simple, but if you can relax into your meditation long enough, you might see how everything lines up, and the way out will become clear.

The Eight of Swords represents self-created mental confusion. It is the friction in the duality between the left and right brain - the out of balance state between the logic and emotions. This card implies ideas of restlessness, mental imprisonment, isolation, and self-imposed restriction and victimization.

The Eight of Swords is illustrated as Patchman blindfolded, surrounded by sharp swords flying all around him. He is unable to see the path in front of him and seemingly can't escape his own chaos. Yet, the path is right there; if he simply removed his blindfold, he could easily break free from his self imposed confusion. The skies are quite clear, implying that the confusion is internal. The biggest problem is that he is fixated on the problem, not looking at the solution, and thus continues in his confused state.

This card represents a state of mental imprisonment, which eventually leads to isolation and misunderstandings. The secret of this card is that the way out is actually very simple if we could only remove our blockages to see this. Another way to look at this in a practical sense is to change our perspective and look at the challenge in a new way, one that is not restricted by the lens of limitation that we are currently viewing them through. Breaking down this card even further, it really speaks to over-thinking the little things, and spending too much time on the details at the expense of the bigger picture.

The keyword here is "self-imposed" because these limitations ultimately come from within our own body of consciousness. There is an energy of victimhood and powerlessness that comes with this card, as the character appears to be almost waiting for someone to save them. This freeing of the self must come from within, for no one can do your internal work for you.

There is no need to become a victim of your own mentality - for you are in control of your entire being, including the thoughts and emotions you choose to focus on. Therefore, it is now the time to take back your power and remove your blindfold. You are infinitely powerful and have chosen everything you have experienced in this life - even if you don't fully realize it. The solution to this card is to simply acknowledge that you have boxed yourself in a corner and then step out of it. The power is in your hands.

The reverse of the Eight of Swords comes in the form of the endless spiraling and brooding into the infinite void of nothingness, and the confusion is transforming into frustration. This becomes an angry brooding on the same topic if these ideas are held onto, and not addressed. Sometimes, a lack of restriction isn't a solution but only causes the mind to increase in its confusion, causing further damage to our emotions and psyche. Some KEYWORDS with this reversed state are overly self-conscious, a desire to turn back time, and escapism into a head-space which is not based in any form of reality.

To turn this reversed card upright, we must allow for a release to take place, whether this is releasing tension that has built up in the body or releasing of thoughts and limitations that we have been imposing on ourselves. Did you know that the majority of the tension in the body is actually within our jaws? By working to soften our tense jaw muscles, we actually can experience tremendous peace. Understanding that with the blindfold on it can be hard to see what limitations there are that need to be released in the first place, the first release might even be to truly open our eyes to see where and why we might be confused. Sometimes, just getting away from it all for a short period to look at the scenario from a fresh perspective is really all we need. It is for this reason that the Eight of Swords is simply the double of the respite from the Four of Swords. That rest may be what is needed in order to get a fresh new perspective, and come back to solve our problems with clarity and resolve!