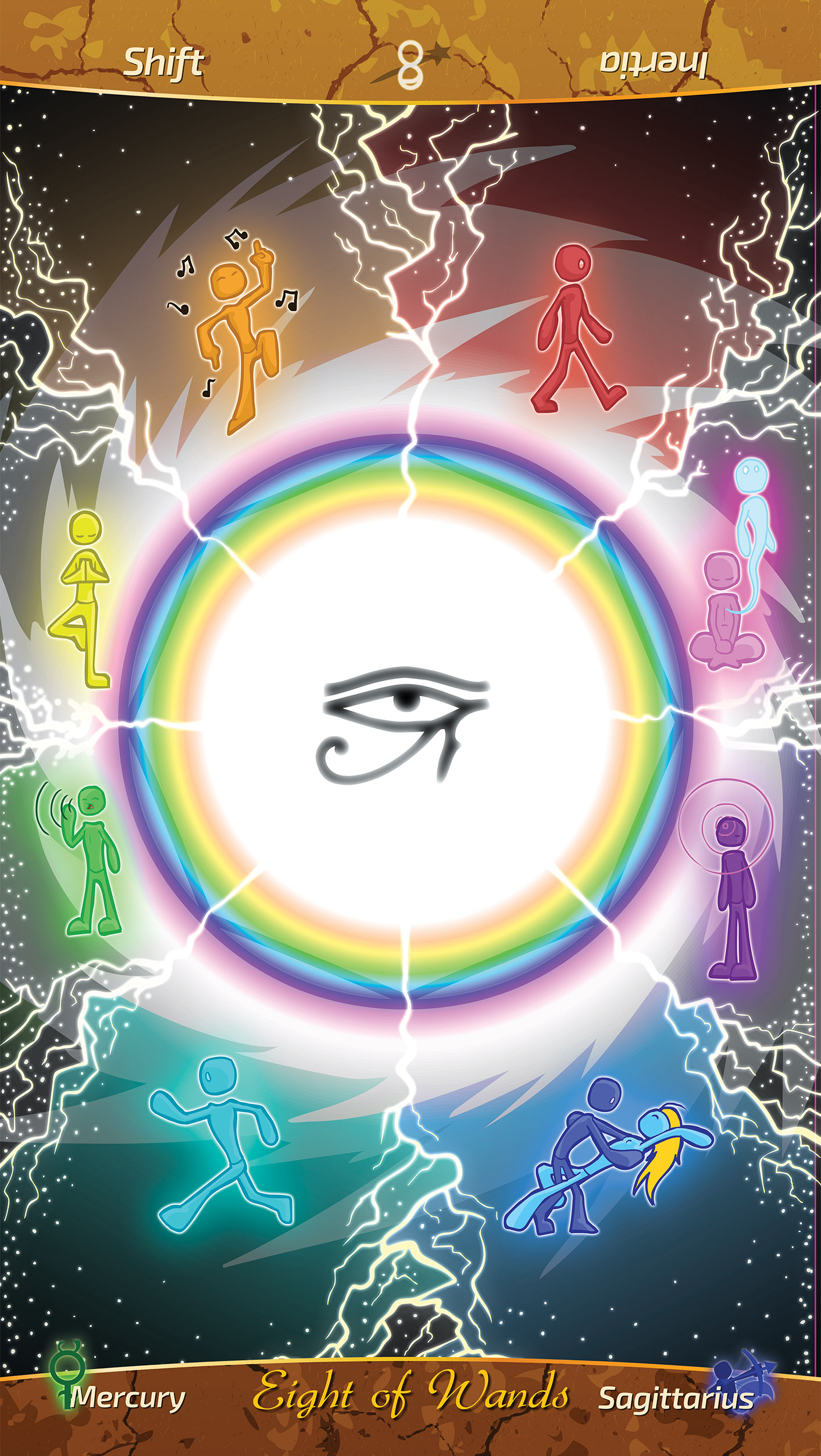 With the quality of moving fast, the Eight of Wands embodies a sudden shift or rapid change in one's flow or direction, specifically one that happens very quickly as a result of new awareness shining intensely in the mind. There are no flames, for the light is so fast that it explodes straight to electricity which manifests as particles of the physical reality, thus describing that a sudden change of awareness leads directly to new action.

When a flash of awareness ignites your mind and you realize something different or new about reality is the perfect time to bring that new consciousness into a full creative force. Do not sit idly by and let the realization fade, ground it in reality and take the action you've been stricken with to manifest your dreams!

The Eight of Wands is a fast-moving, sudden shift in energy. It represents a rapid and exciting change in your flow. One that comes in the form of a realization that can lead to all manner of possible changes.

Thus, the principle descriptor word here is shift! This card represents speed, awareness, electricity, and realization; the creation of matter through energy. It is both very focused and busy by nature, but in a way that might imply getting lost in all of the changes that are taking place and moving through you.

The Eight of Wands is drawn as an explosion of realization! In the center, the Eye of Ra represents the new awareness itself, which activates one's consciousness and causes a shift in perspective. Emanating from this central point of consciousness are eight bolts of lightning, which might even be observed as neurons in the brain firing at a rapid rate, forming new synapses and leading to a plethora of new ideas.

These ideas come in the form of movements and actions, and there are eight different possibilities giving examples of what this might look like. They are talking, walking, running, dancing, balancing, thinking, connecting and astral projecting. In this card there are no flames, for the electricity itself is the fire moving so quickly that they have manifested as an electrical charge. As they extend farther from their source, they begin to shift into particles, that which this physical reality appears to be made of.

This is a very action-oriented card, calling out to you to take action on the thing you want or need to be doing! Make your move! Kick things into high gear! Jump headstrong into the opportunities that are presenting themselves to you at this time, and do not delay! When the realization hits you, you must ground it into physical reality lest you start to doubt your newfound truth and may even forget its significance.

The presence of this card heavily implies motion, and this motion can be mental, spiritual, physical, or emotional. This could be such as traveling somewhere or discovering something critical. It may even imply communication, such as receiving or sending an important message or just having a very significant conversation.

When a flash of awareness or new realization comes into your mind, this is the time to ground in that understanding. New ideas, thoughts, and patterns are coming to you for a very specific and important reason.

By choosing to go with the flow and embracing what moves through you, you step into your power in so many ways. The change will happen regardless if we allow it or not, so shifting into a state of acceptance will connect you with the will of your highest self!

"If you choose not to decide, you still have made a choice!" - Neil Peart

The reverse of the Eight of Wands speaks towards the quick energy being slowed down to extremes and holding off on the motion due to a restriction cast by the ego, or downright laziness due to inertia. Instead of quick action, it can imply delays and slowing things down to a degree that is may become frustrating, or even an outright stoppage of the energy due to fear or something else that is stopping us from embodying the shift that we are experiencing.

To turn this reversed card upright, you must really tap back into the intention of your heart, that inner knowing about how important this thing really is to you, or if it is still in alignment with the vision you are trying to create. With a level of consideration and care, you can jump into it wholeheartedly without experiencing negative consequences. Remember that jumping into something with haste and "kicking into high gear" does not mean being careless. Distinguishing those things in your mind will allow you to act with control and purposeful action while still experiencing the speed associated with this card.