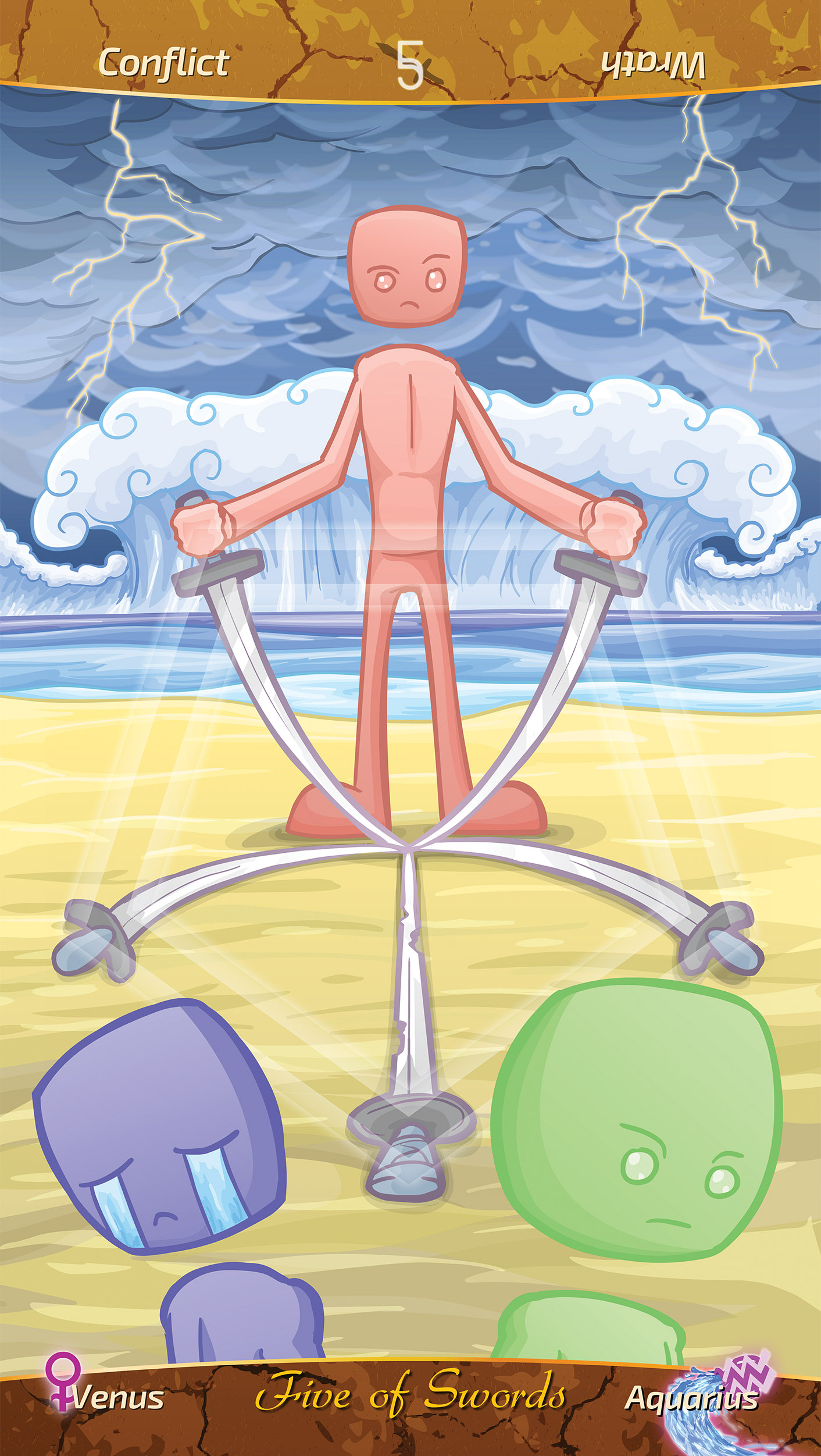 A warrior appears conflicted as he stands over the swords he has taken from his enemies. The two other warriors walk away, defeated, and saddened. However, nobody is the victor for a massive storm, and a colossal tidal wave is on its way that has the potential to destroy everyone. This card intends to say that when battles are fought with cunning and betrayal, nobody wins.

You may have just suffered a defeat, or perhaps come out of conflict thinking you have won. However, you are encouraged to check yourself and be very mindful of what is right and wrong in this scenario. The Five of Swords implies a conflict that can lead to a karmic defeat, meaning that no matter how the conflict turned out (whether you won or lost), you will still suffer a loss because, in truth, the conflict is internal.

The Five of Swords represents a conflict or tension between individuals, which, if not resolved, will be a no-win scenario for everyone involved. This card symbolizes loss, betrayal, weakness, and the realization of limitations, which often stems from the desire always to come first, which is the root cause of the conflict, to begin with. Ultimately, this card describes that something must be let go of in order to move forward.

The Five of Swords is depicted with a patchman standing over the swords of his enemies as he has just obtained their weapons. While the other characters walk away saddened and overcome with loss, the winner appears conflicted as he does not understand the emotions he is seeing in the eyes of his enemies. In the bigger picture, no one has won here, for there is a deadly storm coming up behind the seemingly victorious warrior, showing the karmic fate of all who engage in warfare.

This card indicates a conflict you may experience, which could manifest as an internal conflict between our emotional and our logical sides or one that may appear between ourselves and those in our life. If it has already happened, this card asks you to see who has really "won," if that's even possible. When everyone engages in conflict, unless we are able to bring our heads together and find a solution that works for everyone, there is no true winner. The conflict itself poses a deeper, more underlying problem; why is there a conflict in the first place?

The nature of the swords is very mental, it's logical and usually lacks in emotion, and such is the nature of the conflict in this card, it is logic vs. emotions. This current energy, which may manifest as a problem in your life, is of the same nature as an intellectual crisis.

This is truly a lesson in disguise, for we can always learn from our losses and the pain we experience in our lives, accepting where things are at and use them as growing experiences to help you move forward. Learn to see when conflicts may arise later in life, and embody the wisdom you've gained through previous experiences. In this, the Five of Swords can even embody the spirit of 'forged by fire'; remember: the hotter the fire, the stronger the steel.

The advice that comes with this card asks you to pick your battles wisely - and to take it a step further, ask yourself why engage in battles in the first place... is there a way that everyone can win?

The reverse of the Five of Swords looks like wrath - an extreme level of anger. This is a conflict that has become reckless and bias towards one side, typically the side of "I am right." By this perspective, without allowing for all sides of the coin to be observed fairly, we begin to observe others as hostile, and this is the worst kind of conflict there is. Now it's not so much about finding a resolution, but about destroying the other. Generally, conflict in this space cannot easily be reconciled, so it's best to check and see if you are operating from this space and resolve it internally before it becomes manifest in the external world.

If we are particularly attached to these events, we may deepen the resentment towards whatever it was that happened, and this can cause a great deal more suffering within us if left unchecked. Doubts, pessimism, and fear are often a common result, and again, if we do nothing about it, it can lead to very defeatist mental patterns. Since our thoughts rule the view of our reality, this will only lead toward more conflict unless we are able to fix what has been broken, and repair relationships where possible.

To turn this reversed card upright, we must acknowledge all of the mistakes that we made, in leading us to get where we are. Stop pointing fingers at others and really hold the space for being humble with ourselves. By doing so, we can reconcile the past and bring ourselves back to a state of neutrality; Holding love for ourselves in our hearts will continue to turn this defeat into a forward motion to help us grow. No matter what, a defeat is only a defeat if we allow ourselves to experience it as one, and so if we can change our perspective into that of a learning lesson, and something that we had to experience in order for us to become stronger, then we will rise out of this with a bright new perspective, and be all the happier for it.