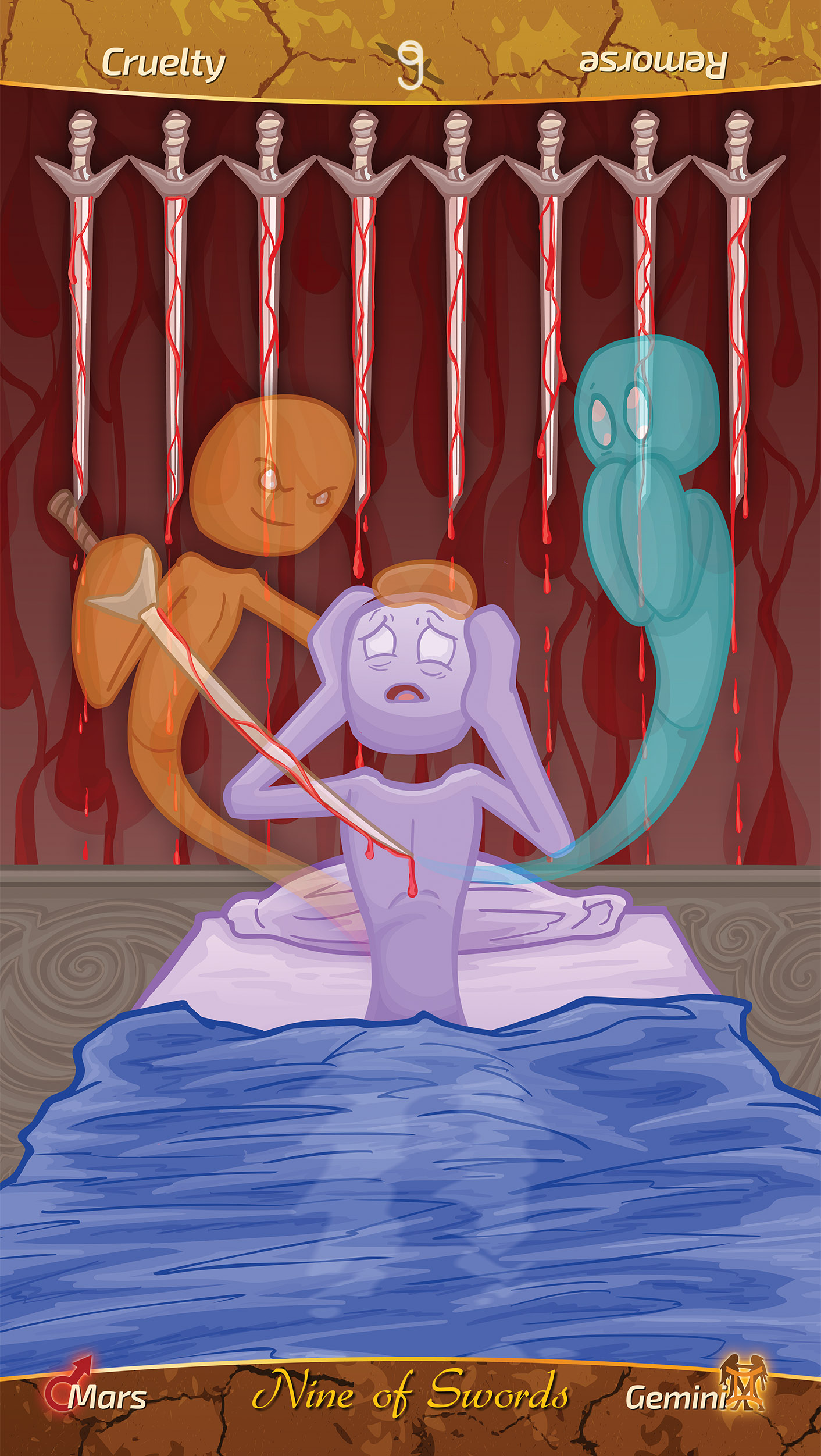 Depression, Nightmares, Regret, Despair, Rage, Anxiety, Fear, Going to the Depths of an Idea with all Consequences

The Nine of Swords exemplifies a mind of which continues its descent into a state of cruelty. The mental chaos from the Eight has evolved to the point of causing not only mental, but now emotional struggle haunts the character with nightmares and visions of death and cruelty; in this, we find depression, regret, anxiety, and nightmares to become real.

This card shows the mind reduced to very primitive instincts, indicating that just as the vulture tears into its prey with survival instincts, the ravage mind tears apart all other energies in order to get what it thinks it needs. Damage, despair, and cruelty are the outcome of this mindset. Thus, the Nine of Swords itself brings awareness to the rich emotional trauma that exists in the world. This is not a bad card, simply one that describes the harsh realities that exist on this planet.

The Nine of Swords takes the self-imposed problems from the previous card and amplifies it to an extreme, creating cruelty in mind detached from all higher thought or love. The confusion from the Eight of Swords has now evolved from a mental struggle to an emotional crisis that haunts this character, keeping them up at night with unrelenting torment.

This is illustrated in the card as a patchman waking up from a horrible nightmare of cruelty and pain. In their dream, there are eight bloody swords dripping with heavy emotions; the ninth blade is found in the hands of his nightmare, who is seen holding it up to the chest of the frightened patchman. This indicates the cruelty that our minds can do to ourselves, and that even when we are cruel to others, it stems from a place of cruelty to ourselves. Here we also see a more pure aspect of the soul of the character emerges from his heart, opposite of the sword. This personification shows our own disconnection inside so that as one part of the mind descends into cruelty, the other part of us watches in horror.

The Nine of Swords embodies the essence of depression, nightmares, regret, despair, and fear. This is the natural result of what happens when we don't deal with our mental struggles, they bleed into other aspects of our reality and cause us fears towards others, our past, our future, or other life situations at hand.

As it has been drawn in this card, our mind has been reduced to its primal instincts of survival; cruelty and despair are what ultimately emerges from this mindset, as the forces of thought have now been entirely detached from all of the higher mind, and love.

This card invites you to observe the cruelties in the world, and see how they may reflect within you as well. It may bring to your awareness that you could be worrying excessively about a certain situation, or something that needs to be identified along with all of the consequences that may come along with it. This is represented by being kept up at night as your anxiety consumes you. If not within you, perhaps there is someone you know who may be experiencing this and could use some gentle love to bring them support.

The solution here is to look at everything objectively and see how these feelings ultimately move through your body of consciousness. Even if there are external energies attacking you, you are always in control of how you choose to react to them. You can take back your power and choose to not focus on the anxiety, but healing instead.

This card may also suggest you are very hard on yourself, and this can contribute to these stresses you're experiencing. Go easy on yourself, remove blame from the equation and just relax; it is best not to immobilize yourself with negativity, but instead focus on feelings of happiness rather than despair and see how quickly your state of mind will shift.

The reverse of the Nine of Swords is remorse, the lack of resolution and completion that comes along with the numerology of the nines. With this card upright, the energy actively leads somewhere: towards a conclusion and an end. But reversed, we have guilt, the crushing feeling of remorse for our own cruelty towards others or ourselves, and the knowledge that we are guilty in the eyes of lady Justice. This feeling does not easily go away unless we make things right in our lives, and without doing so - we are brought to torment.

As far as the nightmares go, the reverse of the Nine of Swords may indicate one of two things; the first being that we either do not sleep at all because of just how focused on our stresses we are, or that we have been ignoring our responsibilities and they have now manifested into our subconscious in the form of nightmares. We may be sleeping like a baby because we are totally ignoring our problems. However, this will only allow them to stack up, thus creating waves of turmoil for us in the future. Though "ignorance is bliss," ignoring our problems will not make them go away.

To turn this reversed card upright, we must acknowledge that there is a difficult and even painful problem or challenge of some kind that we are experiencing. There is cruelty that exists in the world, and cruelty that exists within us. Often when we are cruel towards others, we find that the reasons for doing so are due to insecurity within us and something that we must face and deal with. Thus, the solution becomes twofold; we must give ourselves some comfort and allow ourselves to acknowledge the way that we feel about ourselves inside, seeing what ideas we are holding onto that are causing us to believe we are not enough. The affirmation "I am enough" here can go a long way. The second thing we must do is to have a heartfelt conversation with those who we have hurt, to be humble, and do whatever is required to clear the karma we have with them.

As long as it is left lingering, there will be leftover feelings of shame and guilt, which will continue to haunt us until we are able to resolve it fully. On the other hand, if we are on the receiving end of a great deal of cruelty towards us, we must face and observe what thoughts and feelings we are holding onto that are pulling these negative people into our lives. If we continually beat ourselves up, we make ourselves susceptible to their onslaught. If we choose to change our way of thinking and live our lives differently, we will realize that we begin to manifest new outcomes in our lives, and move into a higher state where people simply do not act this way towards us, or if they do that it no longer has any power to affect our well being.