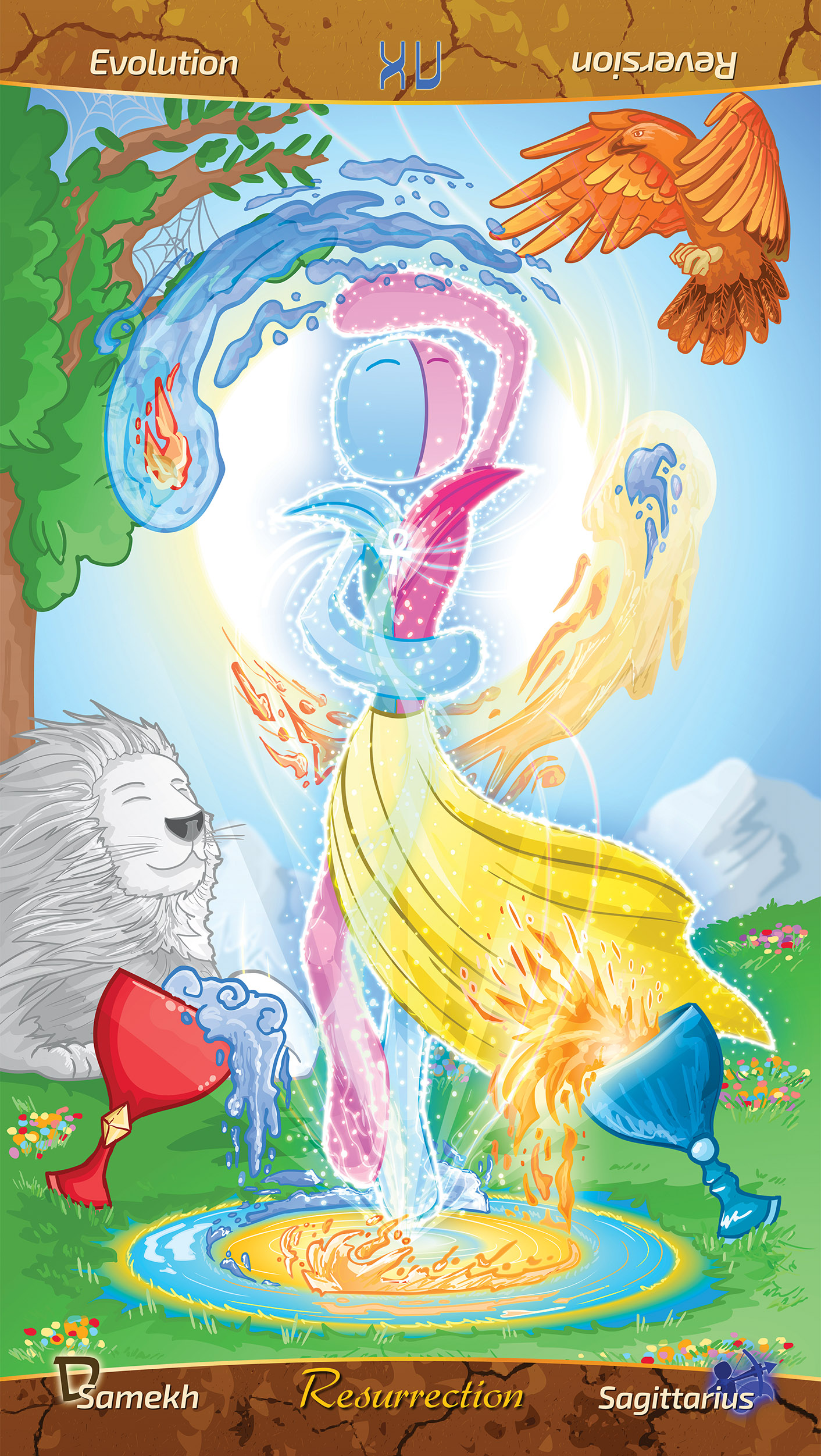 In the act of Resurrection, the Soul of Patchman now actively recreates his body of light after his passage through Death. He has become illuminated by his connection to Spirit, and sees his old behaviors and thought patterns for what they were: products of his ego. The power of Patchman's spirit initiates evolution by reassembling the ingredients of his past in a new way thus creating a renewed and higher self.

When you draw Resurrection, you are advised that now is the time to actively evolve into a new you! You have all of this creative freedom inside of you, the awareness of limitless potential, and the ability to become anything that you want. You have surrendered your ego, moved through the passage of Death, and come out on the other side with a deeper connection to your higher self, and the ability to become a new you.

Traditionally called Temperance or Art, Resurrection is what follows after the experience of Death, wherein one can explore reality with a new sense of awareness and understanding, greater than what was available to you previously. You are now free to take the ingredients within your consciousness that you had before (which by the process of Death had dissolved into more primal states of being), and apply new levels of creativity and consciousness to it, and recreate your sense of self from the ground up; specifically with new insights that simply could not be observed from the previous level of consciousness you existed at before you experienced your "ego death". Therefore, the card is called Resurrection, for this new enlightened patchman resurrects himself from the ashes of his former self made anew - whole and complete, and closer to perfection than he was before.

In this card, Patchman is seen rising out of a pool of water and fire, shimmering with light in his new body of light - and actively bending the elements of fire and water all around him, creating a balance of yin and yang energy in motion. As perfect harmony is achieved, these two elements which normally extinguish each other instead find themselves coexisting and creating new life. All of this together depicts a new expression of life, one that could not have existed before in a less evolved state of consciousness.

In the background, there is a tree with cobwebs at the top of it, which represents the subtle interconnectedness of reality of which we become aware when our minds are no longer constantly busy thinking about the day to day minutia of the created human world. Many people are afraid of spiders, but through the lens of the newly created being, one can observe spiders as the masters of geometry that they are.

This card represents a time for your personal and spiritual evolution, by fusing different aspects of yourself together and express them outwardly in new ways. It is a call to find ways of expressing yourself and step into the you that you've always dreamed of being. In this, try mixing and matching different styles and personalities within you to find even deeper aspects of yourself; it's all about creative freedom and artistic expression.

What are some of your favorite ways to express yourself? Explore them! Create art, play music, dance, try something completely new. Connect with your throat, the center of your creative expression.

In a deeper sense, this card subtly reminds us that we are the alchemist of our lives, and we can create anything we want! Every little aspect of our realities are intertwined with our inner consciousness, and we need only choose to explore it, and play!

The reversal of Resurrection is the reversion to our old way of being, forgetting the experience of death and returning to our former, more ego-minded state of being. This could be described as simpler as the destructive aspects of the human psyche. This can often come along with short-sightedness and the lack of ability to see clearly the depth of possibility within us, or wanting to return to the feeling of "safety" that we used to feel, even though it was limited; the transformation didn't stick. Normally, Resurrection is the renewal of ourselves, better than we were before, and so in it's reversed format this card suggests that even once we have been broken down if we emerge out of Death and continue our previous behaviors before our death experience. In the potential of our resurrection, we forego the possibility of creating ourselves by the power of Spirit and instead create by ego alone.

To turn this reversed card upright remember that when we destroy externally, we destroy internally, and vice versa. By tending to our inner gardens with care, we will naturally create the same in the external world. It is a healthy reminder that by listening to the calling of our hearts within we can gain tremendous guidance than if we were to forego its wisdom, even if we don't understand everything that it has to say or don't always know how to interpret its messages - when we do hear it, if we don't simply forego it but even consider putting it into action, we will do wonders for ourselves in a whole and natural way.