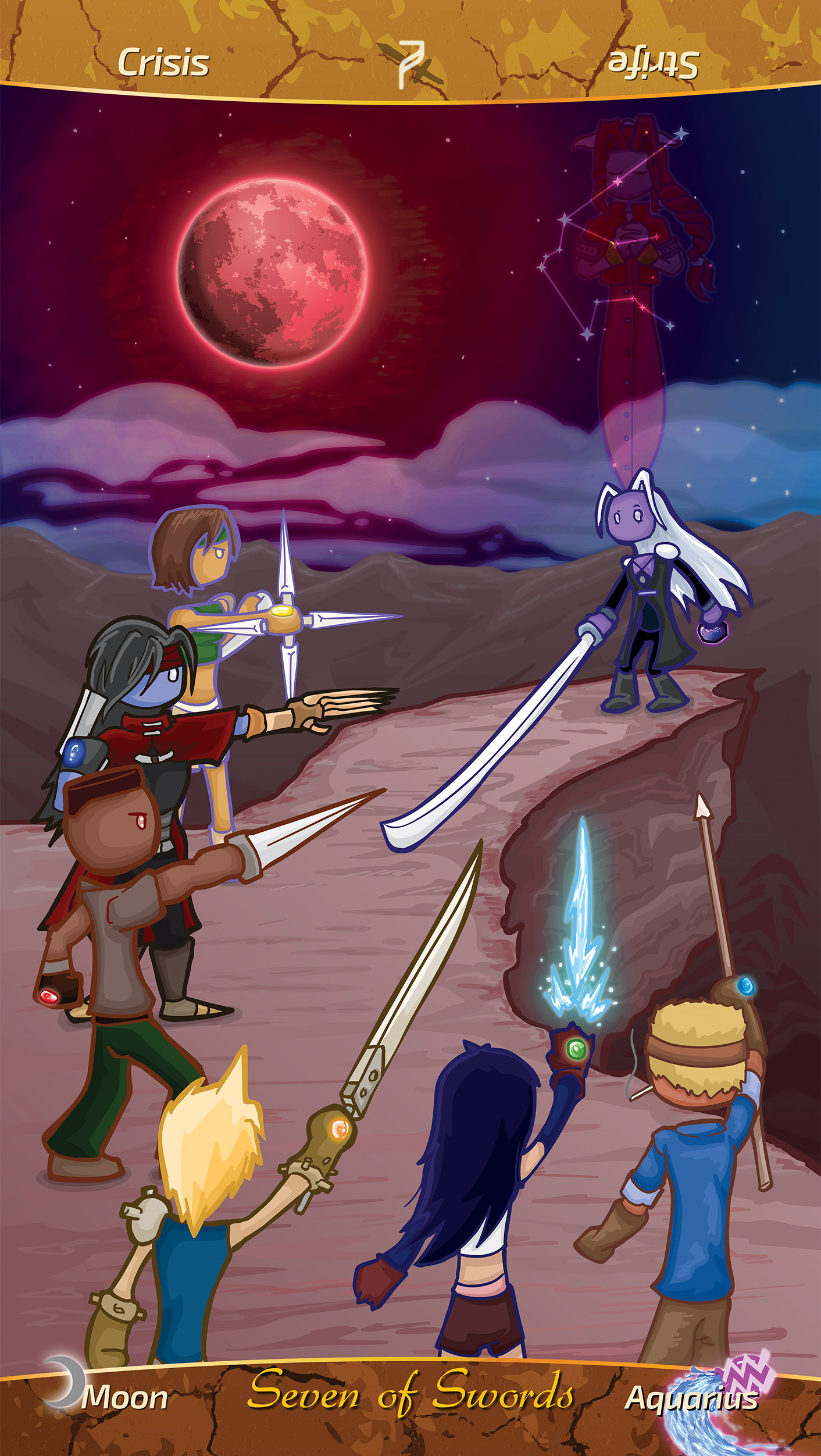 Wish to Compromise, Trickery, Confrontation, Standoff, Cleverness, Anarchy, Destiny, Cheating, Trying to Get Away with Something, Many vs. the Few

Six warriors stand facing an enemy; their swords pointed toward him. The enemy points his sword back, a standoff is imminent, but there is a wish for compromise even if it is unlikely. Here there is a crisis; the six swords are all unique and weak on their own, where the might of the single sword is strong and enduring. Thus the equation is balanced in its opposition. As long as these forces stay in a combative state, there can be no harmonious end, though the end will come nonetheless. One will overtake the other.

The Seven of Swords is a reunion of conflicting energies and embodies the essence of deception, opposition, and the attempt to get away with something. Here there is trickery, cheating, and intentional confusion, all of which are bound to fail. This card shows that ultimately, all characters are bound to their fate no matter how many tricks they are willing to employ.

The Seven of Swords is a card of strife, describing in the most cosmic sense - polar opposites coming back together to face their extreme dualities - or a sharp and bitter disagreement. It shows six warriors facing another warrior who has been backed up against the edge of a cliff. This character is cornered; all swords are drawn and pointed at each other. A peaceful outcome does not appear possible, though it may be yet. This card holds the essence of cleverness, anarchy, cheating, and intentional confusion. Most commonly, it represents the energy of trying to get away with something, but in the end, failing to do so. In a very numerological sense, it stands for "the many versus the few" and "the few versus the many."

In a practical and physical sense, this card embodies actions such as avoiding obligations, attempting to take the easy way out, preferring solitude, acting selfishly, and ultimately lying to ourselves and others in order to get what we want. No matter how we slice it, these behaviors will not get us what we truly want, and will only cause us greater frustration and turmoil in the long run, but the mind is a fickle thing and will do anything and everything it can to try and find a way out of facing the music, and owning up for itself. It is in this sense that we can find a resolution yet, but only if all sides are willing to do this work.

Are there certain responsibilities or commitments you have been avoiding? Remember that the more you run from your problems, the more they grow, and the harder they will be to deal with in the future. This card calls to attention the possible negative outcomes that may happen when you don't act from the heart or within your truest spiritual alignment; or at the very least, acting from a space of a muddled mental outlook, with uncertainty towards why you're doing something in the first place.

You may feel like you have gotten away with something, but have you really? With the understanding that everything is deeply interconnected on an energetic level, every action has an equal and opposite reaction, even if we don't see it immediately.

On a final note, this card can also stand to represent a partial success but yielding when victory was within grasp as if the last reserves of strength were used up.

The reverse side of the Seven of Swords is strife: the hope for harmony is decided to be futile, and fighting will remain until at least one side overtakes the other. Sometimes we may play tricks or lie to ourselves or others if we genuinely believe it or are simply ignorant of what's really going on. With this reversal, however, these decisions we are making are harmful in an attempt to get what we want. This leads to treachery, evil tricks, or even employing self-pity and other egotistical maneuvers to manipulate people into acting how we wish them to. Here we are living in a world of illusion, blinded by our own thoughts and desires to be able to see the results of our own actions, which cause us to get caught up in a great deal of mess. From this place, it is doubtful any strife can end well.

To turn this card reversal upright, we really need to decide to be good people. If we know that we are doing something harmful, whether it's to ourselves or to others, we must practice correcting the behavior and acting in a way that is selfless instead of selfish. Often we act like this when we feel as if "we're going to hell anyway, might as well live life to the fullest while we're here," and do bad things for the sake of the mild amount of amusement we may gain from it. If this is the position that we're in, having done something terrible, and we know it, we can begin the healing process by repenting with a pure heart. We can be forgiven and set ourselves on a path of healing if we are open to giving and receiving genuine love from everything around us. We are not locked into a horrible afterlife-sentence if we can recognize that we are still connected to everyone, and there is more to life than just us. Often the hardest part in forgiveness is being open to forgiving ourselves, for only you and Spirit really know how many skeletons you've hidden in the closet. If you start here and allow yourself to empathize with your past mistakes, you can start to find the love you have been so desperately seeking.