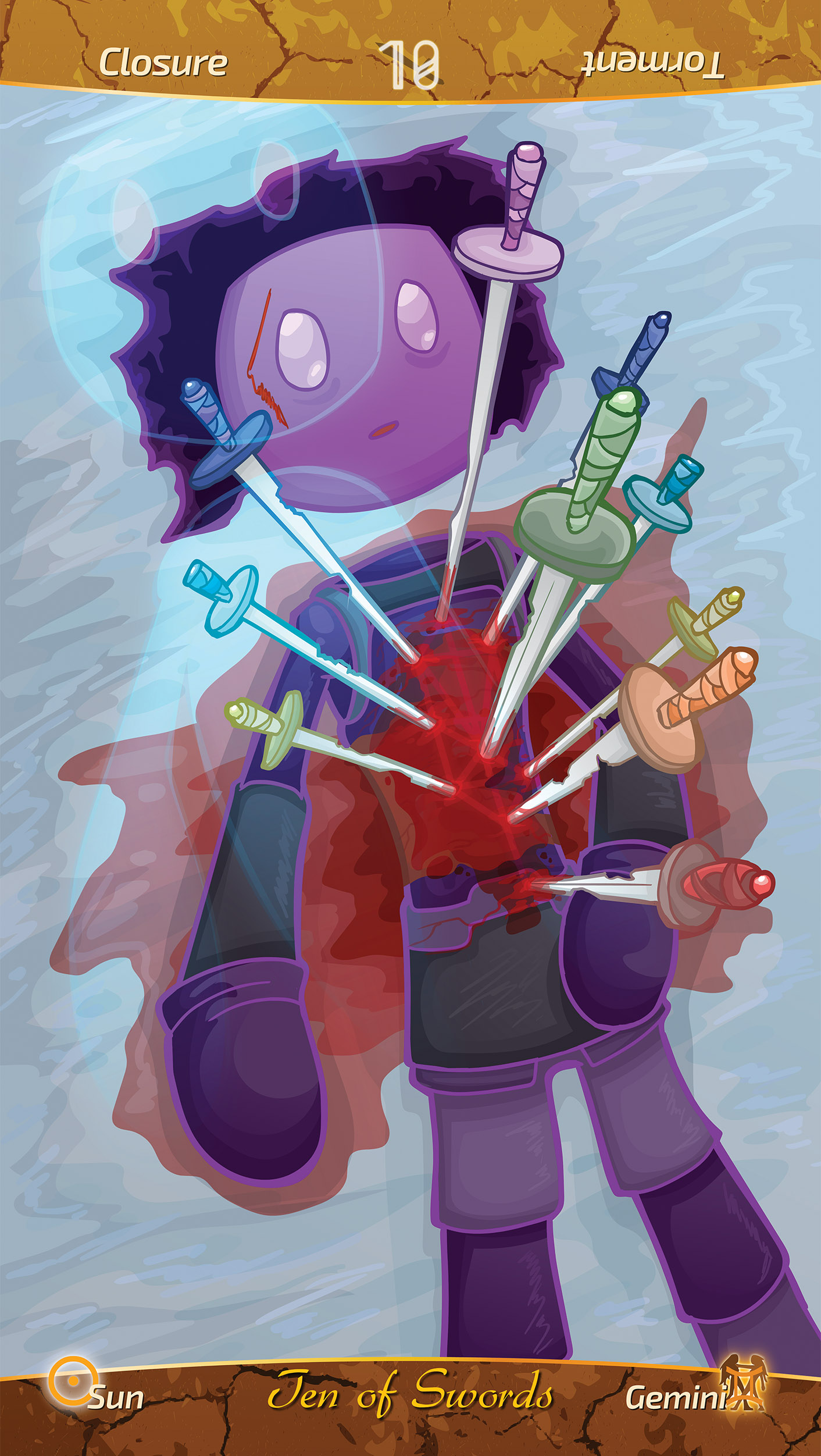 The Ten of Swords shows a Patchman Character lying on the ground, stabbed with ten swords in the form of the Tree of Life across his chest. He looks surprised that he has just been stabbed; he was not expecting this outcome. However, above him, his spirit has already left his body, and now free from the pain and struggle that he was experiencing, looks upward to the next cycle.

The Ten of Swords indicates the result of the Swords descent into ruin, marking the completion of this cycle and the new beginning to follow. While this card does depict an end, defeat, and even a harsh change that is difficult to accept, it also signifies transformation, rebirth, realization, and wisdom gleaned from pain and loss. As a result, the mind which was scattered and chaotic now finally finds calm and can return to its focused and peaceful natural state once again. This card invites you to allow the difficult change or cycle shift you're now witnessing, so you may see it come to a close, and your mind may find ease.

The Ten of Swords is the completed cycle of the suit of swords, blending into a new cycle and new beginnings. Even though we are about to embark on this new journey, the lessons learned through our hardships and pain shall not be forgotten. While it does represent the energy of loss and defeat, not all is lost in the end. This is illustrated by a patchman character who has been stabbed by ten swords in the form of the Tree of Life in his chest. His looks surprised, as this death was sudden and took him by shock, but his spirit can be seen peacefully exiting his body, rising into new horizons.

Despite the traumatic pain that he experienced, his soul is already onto the next cycle of life, free from the pain and limitations of the physical dimension, eager to see what new experiences await. This card holds the energy of endings and completion, followed by rebirth, transformation, and the gaining of wisdom through pain and loss.

The Ten of Swords is the end of the mental chaos that had been building for a while now. The swords are very mental in nature, and on the Tree of Life, this card represents Malkuth. Our thoughts have now entered into the realm of complete detachment from anything other than sheer reckless force, and are driven into a state of ruin and decay from which they will rise again, born anew with new learnings from such life lessons.

This card does not mean to imply a physical death, but rather that a transformation and rebirth is taking place, although perhaps a painful one at that. Energy is never destroyed; it only continues to change its form over and over again. With that understanding, the concept of death becomes a lot less scary and potentially even exciting. This card also describes closure, just putting a lid on it and calling it done.

This card is heavily associated with a sudden realization of pain and loss, one that was unexpected in nature, but there is a flipside to this. With this release and a humble new beginning, the cycles of life start over again, infinitely flowing from one end to the next beginning. It is up to you which side you wish to focus more on. There are so much wisdom and insight that can only be learned through experiencing painful situations, and you can use what you've learned to help others going through something similar.

This may be difficult to accept at first, but in the end, it can create a beautiful outcome; the Ten of Swords asks you to let go and not resist changes in your life. Allow them to flow, and they will eventually create renewal and the birth of the next phase of becoming who you really are.

The reverse of the Ten of Swords embodies the hardest aspects of pain associated with this card, and then instead of learning the lessons from this hardship and transitioning out of it, we continue repeating the cycles of hardship. This is done by ignoring the valuable information that should have been realized by such an extreme situation. It is a pain and death aspect of this card, but without the spiritual release and renewal, which is normally implied by this card. The swords sink deeper, the pain and depressed feelings linger, creating a sense of stagnation and torturing its victim. If this feeling came with a feeling of betrayal, upright, it might imply "backstabbed and left to die." Reversed, it might imply a worse feeling; "Backstabbed, and then the opponent twisted the knife, torturing them, and making them suffer as long as possible." This becomes an unrelenting torment that is incredibly difficult to correct inside of oneself without a great deal of emotional healing and support.

To turn this reversed card upright, first, we must identify where this pain and sorrow is coming from, who is backstabbing who, and why? Or, how are we inflicting this pain on ourselves? From here, it is going to be critical that we seek to love and support from our environment, reaching out and accepting any help that is offered. A loving and nurturing parent or elder, a family member who cares, a friend who loves us, or even a guidance counselor. If we can do this, we can bring about an actual resolution to the source of feelings inside of us, release our anger and pain, and begin to move forward in the direction of love and light. Unless we can acknowledge that we have a great deal of pent up anger and rage within us, and address it with care, we will never be able to move forward.