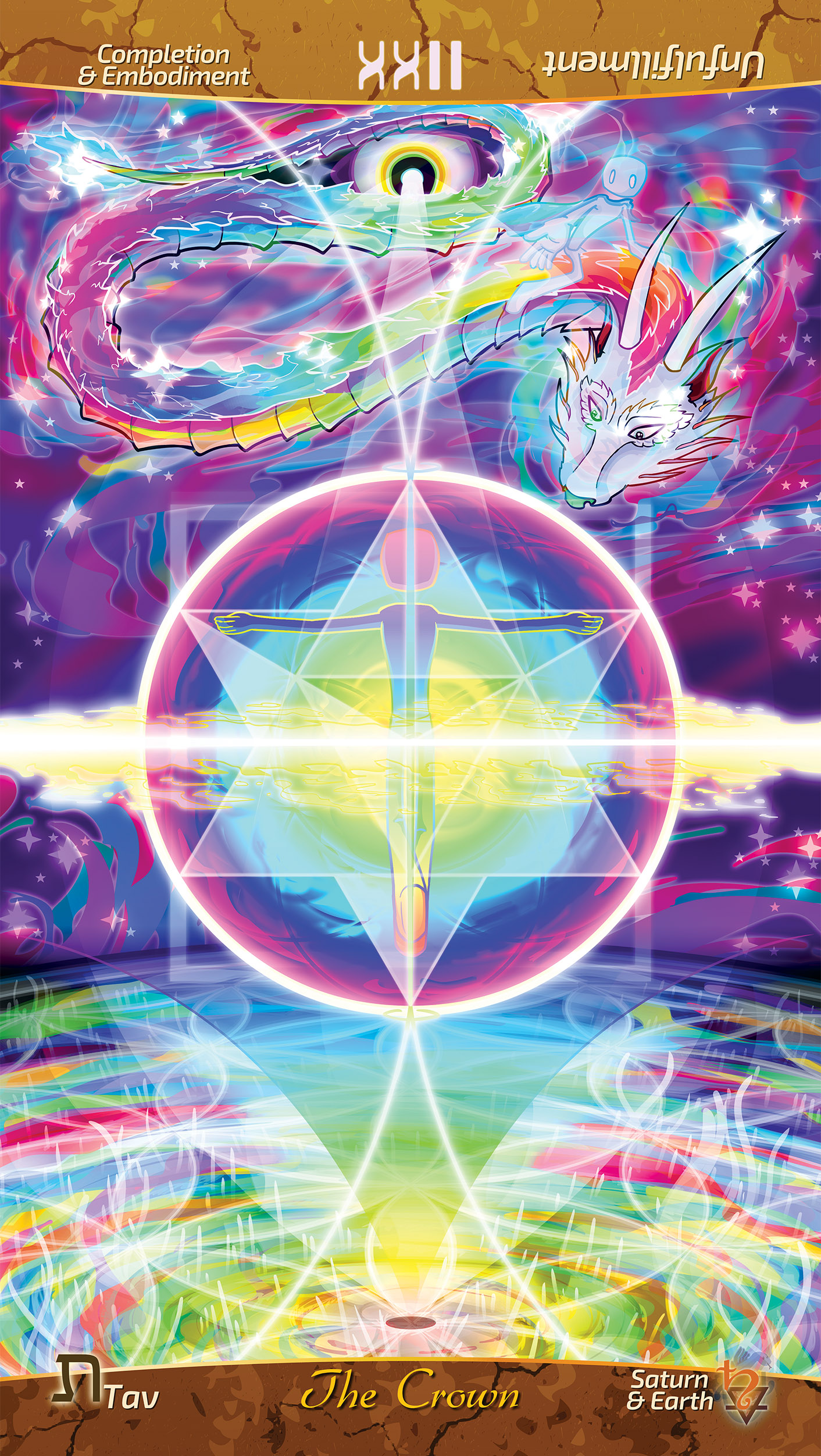 Saturn & the Element of Earth

Upon emerging on the other side of the portal (The Aeon), Patchman experiences a new transcended state of consciousness. He thought in the beginning that he could detach himself from his body and be a free spirit, but as he completes his journey, he realizes that spirit and body are one, and he is the supreme creator of his reality. His crown chakra is now fully opened. He looks out over the horizon with a feeling of familiarity, realizing he is back where he began his journey long ago, and then takes a step off of this new cosmic cliff.

When you draw The Crown, it describes the grand and harmonious completion and resolution to a cycle in your life and the beginning of a bold new adventure from a new way of thinking. It most often signifies ideas such as everything coming together at long last, or experiencing mastery of a profession or craft. This card could even signify traveling to new places, both inside yourself and out in the world. In the most cosmic, and esoteric sense, The Crown represents the ability to take control of your destiny, embodying all that you truly are, and actively creating your reality with greater spiritual understanding, and enlightenment.

Upon moving through the portal, Patchman experiences a new and transcendent state of being, unified in awareness between Spirit and body! This card is the supreme completion and the place from which a brand new adventure shall begin. Traditionally called The World or The Universe in other decks, The Crown is the bridge to a higher understanding and marks a new level of enlightenment achieved.

In Patch Tarot, this card (traditionally titled World or Universe) is called The Crown for two reasons; The first is that the Crown is the highest Chakra on one's body, and upon reaching the Crown the only concern of a soul is higher awareness and the next level of life. It implies deeper understanding than ever previously achieved, and fundamental shifts in states of being. The second reason is that the Crown is also the translated name for Kether, the highest Sephira on the Tree of Life. The corresponding creative force is called Tav, and is not only a bridge from the higher planes to the physical, but forms a bridge to return to the higher light of the source.

In reaching The Crown, we experience a deeper level of spiritual communion with Spirit as we reach for our own higher striving and truth. It's important to remember that there is always a higher state and awareness of Spirit that can be experienced, as Spirit is an infinite concept of the limitless and boundless; therefore for all of eternity, we can continually and forever strive higher and higher to experience greater understandings. It is for this reason that the very next card in the Tarot is right back again to The Child.

This is the aftermath of a great transformation, all there is to do is to enjoy your growth and the completion of one aspect of your journey! Similar to cards numbered "10" in the Minor Arcana, Card 22 represents not only grand completion but the beginning of a new cycle altogether. This card is very special, being the only card with two Keys. Completion of the cycle, and the embodiment of Spirit fully in the physical body.

In this image, the Patchman who previously rose into the portal in the sky new emerges on the other side of the portal, seen below his feet. Around his body is an activated Merkaba - the Lightbody - spinning in full effect, which implies deep spiritual activation and revelation of the soul. Above, a dragon spirals around the cosmos, the fully matured higher self of the serpent which appeared on many previous cards. Riding on the back of the dragon is another illuminated patchman, who extends his arm out towards the newly ascended Patchman, beckoning him to come on another cosmic adventure. The symbolism of the dragon and rider also describes a complete and total unity and integration between the root forces of the cosmos and the higher mind of the individual.

This marks the end of a cycle in your life, the entirety, and completion of events and finding a home in one's inner self; paradise in the mind. The appearance of this card tells you are about to or have already reached the end of your journey. What journey is that? Inside, you already know the answer to this question.

As it relates physically, this might indicate a new feeling within of being able to finally take control of ourselves and start a new life adventure! It also can indicate a new level of spiritual enlightenment on your journey. Beyond this, the appearance of The Crown can indicate that everything has finally come together, a huge project has been completed and your efforts have fully paid off.

The Crown reminds you that you are exactly where you're meant to be on your path through life, and about to begin again with a new level of awareness to apply to whatever it is you so choose. What are the next steps you want to take? What have you learned from your challenges, fears, and accomplishments? Take this time to observe all of these together before jumping off again into a new journey; and remember, after the Crown, all that's left is the Child, and so we begin again on the great cycle of life.

The energy behind this card is completion and success, so rejoice in your transformation! Remember, the journey of the soul is never over, but you have overcome much throughout your voyage, and deserve to enjoy your accomplishments. Congratulations, and good luck in the next cycle!

The Crown in reverse implies a lack of fulfillment or being without closure that is needed in order to truly be resolved on a matter. This could look like being on a road to nowhere, or having false visions or ideas about what is and what is not. In order to correct this, we must take account of what still remains out of balance, and where we are at and what we have done to cause the energy to be the way it is. We are ultimately responsible, and so if we have been procrastinating or frustrating ourselves with our inability to complete something, this could tremendously relate to why we are receiving this card reversed at this time.

To turn this reversed card upright, we must find a place of acceptance in our lives. A lot of the time, we hide things from ourselves or deny them, even when they are blatantly true. Thus, by allowing ourselves to just accept whatever it is we are in denial in, we can instantly begin moving back into a state where we can actually bring ourselves to completion on any particular thing, whether it's a bad relationship, a project we are no longer inspired by, or a spiritual path which we no longer feel so compelled to practice. At the end of the day, you are always in control and can create completion by simply practicing mindfulness, discipline, and corrective behaviors of our past mistakes.