The Prince of Cups 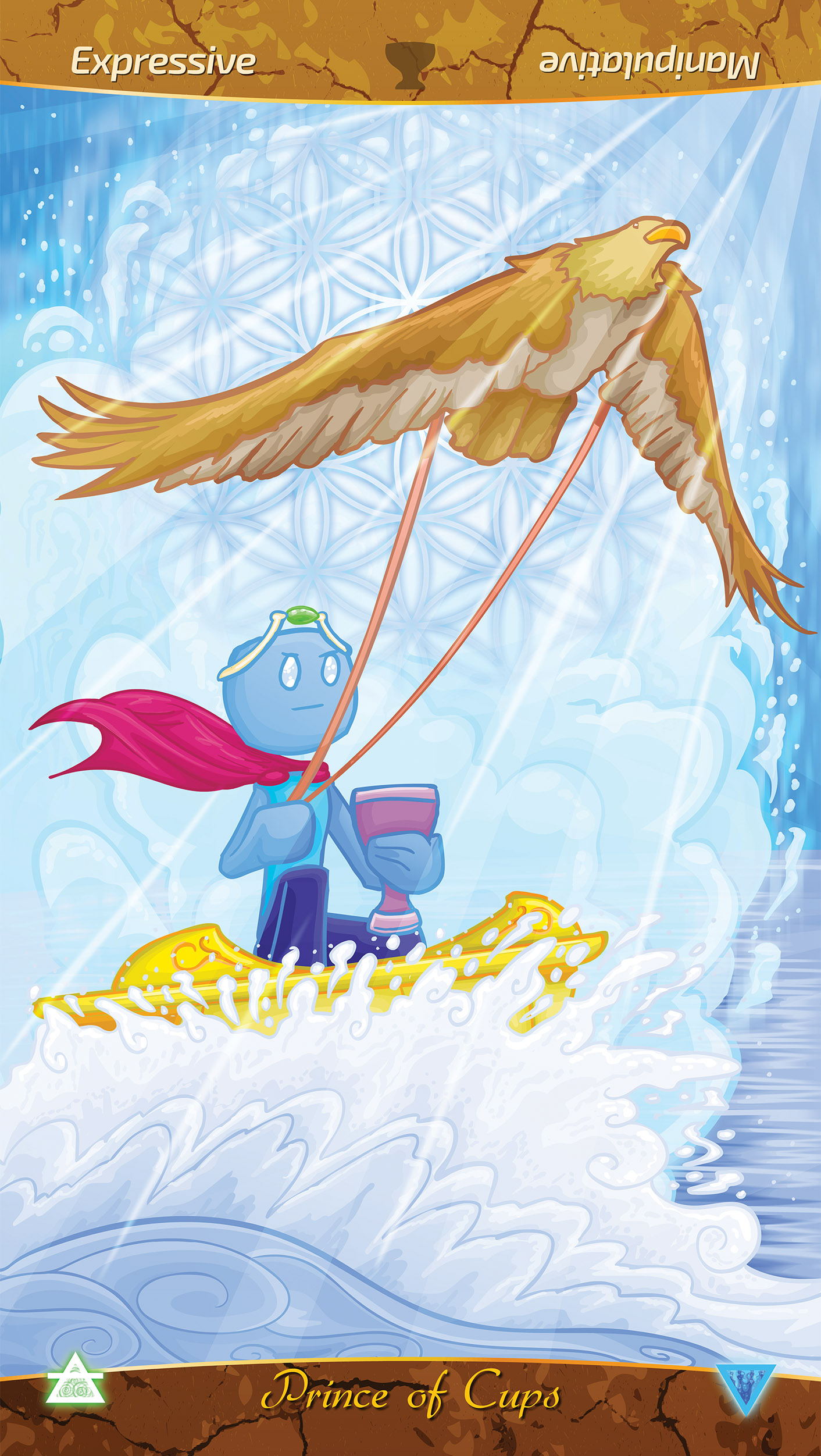 The Prince of Cups is the Airy aspect of Water and embodies the elasticity and steam of water. He has so much to give, but the way that it often comes out appears as volatile and explosive; yet he often carries a calm surface with him, hiding the tremendous feelings within. He is the power of thought applied to emotion and the ambitions that come from this dynamic.

The Prince of Cups is an invitation to explore the ways in which you are applying thought to your feelings and communicating these ideas with others; to explore which direction you are putting your energy toward, based on your feelings. The Prince of Cups may also symbolize a person in your life who is clever and open-minded, whose artistry might not appear to be obvious at first, yet their power is magnificent when revealed.

The Prince of Cups is the air above the surface of the water, and the power of steam and mist. He is a combination of the spark from the King and the reflective nature from the Queen, which makes for a very intense combination. This prince holds many different aspects within him, which might not be immediately noticeable due to the calm look on his face and his focused energy; yet this calm demeanor masks tremendous passion and emotional intensity.

In Patch Tarot, he is drawn riding a chariot atop the water, using an eagle as a guide to pull him forward. This represents his mental focus which guides him forward with tremendous speed and agility. The water around him bursts up with plumes of steam, showing the transition of emotional energy into vapor, and the intensity within his heart.

Because of his nature, he can come off as quite charming to those around him. Water generally has a calm surface, and the prince displays this quite well, making him appear often as "calm, cool, and collected", despite the contrary which swirls beneath, only steaming when his passions are released at their peak. In his sensitivity, he is also quite a romantic, his intuition and emotions can be used to gain the interest of those around him; his musical ability is a channel for his deeper hidden emotions to come through, invoking feelings in those who listen.

The Prince of Cups can also represent a person in your life who embodies these characteristics, subtle, kind-hearted yet passionate and intense when they want to be. The prince shines a light on these aspects of ourselves that are emotionally charged, and the mind surrounding it which carry these feelings into manifestation.

By drawing the Prince of Cups, you are invited to find your gifts in life and give them away freely, channeling your creative passions into all that you love.

The reversal of The Prince of Cups describes that ultimately he can become very selfish when he is focused solely on his own personal gains or aspirations, without any care towards others. This recklessness comes from the desire for power and wisdom, and his will to do whatever it takes to accomplish his goals. By the nature of his emotional depths and intense thoughts, he can even become cruel if his waters become agitated, exploding outward with rage.

To turn this reversed card upright, we need only observe why we are doing the things we are doing, and acknowledge whether they are for us, or for others. Do not be afraid of the answer comes back "this is for me"; there is absolutely nothing wrong with this! Release any judgment you have, and simply realize that this is the case. Do not expect others to feel the way that you do towards the subject in question. Further, if you have a lot of pent up anger or energy within you, you are invited to find healthy ways to release it that doesn't cause harm to those around you. This is where being mindful of cruelty comes in, but realize that cruelty is only possible when the anger that is coming out is directed towards someone or something. If it is simply an explosion of energy, rather than an attack, it can be very healthy to fully express ourselves and release any stored up energy!