The Prince of Swords 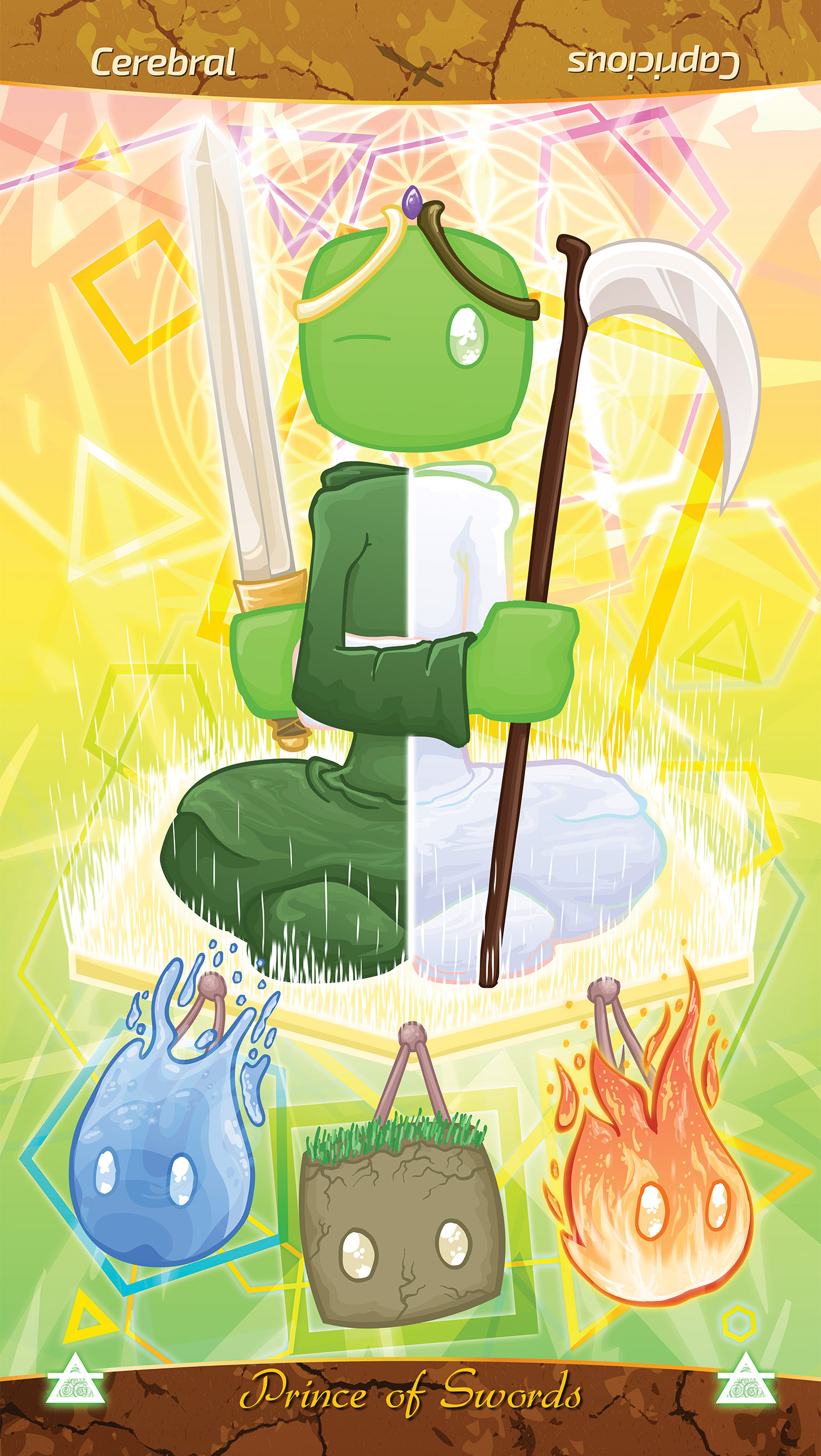 The Prince of Swords is the unified division of thought, the mental aspect of the mind. He holds the sword of creation and the scythe of destruction, showing his dualistic nature unified through his body of consciousness. With logic and reason, he rapidly moves from topic to topic, becoming engulfed in whatever he is exploring until the next thought takes over, quick to destroy his train of thought as he moves along. He is seated upon a chariot that is pulled by each of the other elements, though he himself is none of them, demonstrating his influence over and dependence upon the other 3 elemental forces.

The Prince of Swords is all mind and encourages you to take some time to think. Allow the chaos of your mind to be free; in the realm of thought, you are only limited by your imagination. There is no end to what you can think of and perceive, to what thoughtful creations you can conjure. Further, take a look at the balance between the influence your thoughts have on your other inner states: physical, emotional, and spiritual, and also how these three states influence your thoughts. Be aware, that the Prince is very quick to become distracted and is often unsure of purpose because he knows that in the realm of infinite ideas, no single idea is worth more than another. Simultaneously they are all immensely valuable and utterly worthless.

The Prince of Swords is all thought, mind, logic, and rationality. He is depicted in Patch Tarot as holding the sword of creation in one hand, and the scythe of destruction in the other. You can see by his image that he is both incredibly dualistic in nature, yet still finds a state of harmonious balance. One eye is open, one is closed, half of him is dark, the other is light. These are the opposing aspects that simultaneously exist within him, and indicates the polarities of our own mental realm. We create thoughts as quickly as we destroy them, such as the nature of this prince.

He is pulled by a chariot of three elements: water, earth and fire, and the symbolism here are quite large, describing the intimate relationship that the element of air has with the others. Air is entirely dependent upon the other elements for its motion, for it has no motion on his own; yet exists as a balancing point between all of the elements, and is a requirement for all of them to flourish. Oxygen is needed to produce water, it is present in the soil and required to ignite the fire. The Prince is none of these elements but is the catalyst for all of them.

The Prince of Swords encourages you to use your mind and logic at this time; in the realm of thought, everything is infinite; the only limit is your perception of limitation itself. Here you are fully safe to investigate and explore your thoughts without causing damage, harm, or influencing the outside world in any way. This is the realm of meditation, introspection, study, and observation in order to facilitate understanding, and this card implies that these actions are needed now.

A call to the mind; the Prince of Swords invites you to see the value in using logic, science, investigation, and reflection to help you solve a problem in your life. Emotions play a crucial role in understanding a situation, but sometimes they can cloud the clarity of the mind. The Prince of Swords has no emotions, no creative spark, and no grounding influence - he is free to float wherever his thoughts take him and uses his mighty intellect to understand the world and make decisions based off of his logical reasoning. This skill is important when carefully making big life decisions.

To embody the energy of this prince is to set your sights on something and go forth, creating it with purpose and passion. His male energy pushes him forward in his creations, though his lack of the earthen element means sometimes he has a challenge bringing his ideas into physical manifestation.

The reverse of the Prince of Swords can create negative consequences of his actions due to his quick-to-act energy. With so many thoughts spiraling around in him, he is quick to neglect his foresight of what could potentially come down the road and ignores potential challenges and outcomes because of this sheer determination. Described another way, this means not looking before you leap. In its more destructive aspects, the Prince of Swords can become lost in the negative stories of the mind and lose sight of the bigger picture. We are all familiar with this to some degree, repeating the same stories over and over in our heads, but not acting on them and ultimately causing ourselves more trauma and anxiety as a result.

To turn this reversed card upright, we are reminded that in the mind we have both creative and destructive powers, and so if a certain scenario is not working for us - we can easily destroy the thoughts and make a better one. It is only when we become fixated upon a specific idea for too long that we actually cause ourselves mental turmoil. Take the time to use logic and reasoning with the inclusion of meditating, foreseeing and planning, to investigate all of your thoughts thoroughly. Take what resonates and leave the rest behind. Doing all of this will ensure your endeavors go as smoothly as possible.