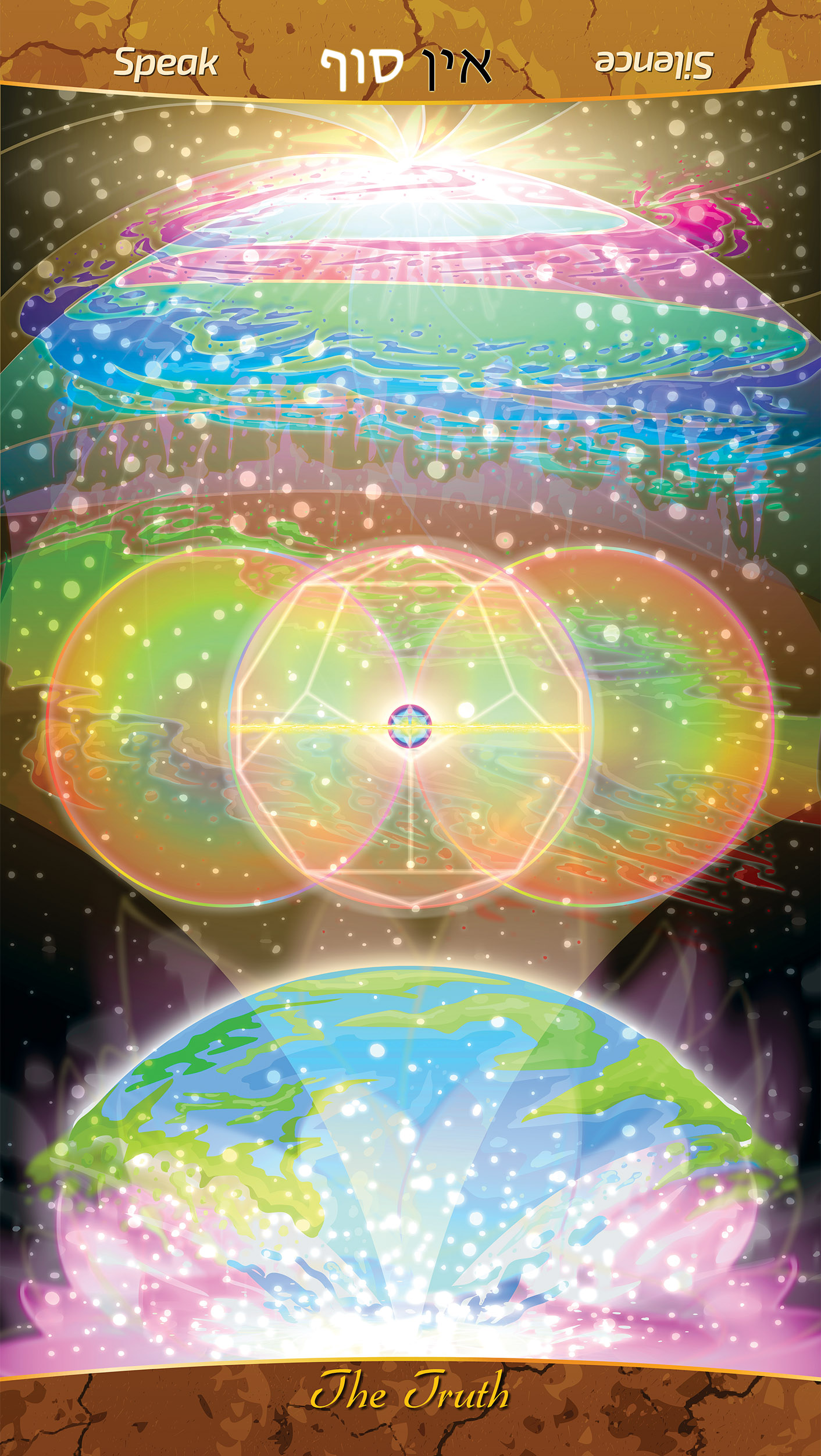 The Truth represents the fundamental Truth that unifies and connects all things in creation: the infinite sea of possibilities from which all manifestations, even The Light, emerges. This is simply the concept of infinity, however, the concept of infinity only exists in the presence of the awareness of it. The relationship between consciousness and infinity is what allows for contemplation of the ultimate and supreme Truth above all Truths.

The appearance of The Truth in a reading is a call to bring awareness to what is true, and even to bring a voice to this truth (at the very least so that you may know it to be true yourself). The key, speak, indicates that in order for the truth to be heard, it must be spoken and shared. It is in the resonance of the truth shared with others that we receive the power of the Word.

The name "Ain Soph" translates to "Infinite" or "Boundless". You might conceptualize this as the very notion of infinity - the never-ending eternal potentiality of creation, which hath no beginning and no end, and even precedes The Light which emerged within this infiniteness. This card is titled "The Truth" because it seeks to identify and bring awareness to the infinite and supreme truth, which may be described as 0 = 1. Something came from nothing, and nothing is everything. In fact, we cannot even comprehend "nothing" because the very word "nothing" is a thing that we are using to describe a concept that simply cannot be known.

The imagery on The Truth depicts the continuation of the previous card, zooming out once more in order to reveal a greater truth. In the Oneness of everything, we are perpetually and infinitely connected to each other. Here there are two more expanded fields connected to and surrounding the original Merkaba field, which synthesize and harmonize together, sharing energy and radiating it out as it is received from the Truth of connection.

The upright and reverse key are "Speak" and "Silence", again mirroring the same pattern of yin and yang of potential actions we may take, surrounding the concept of Truth. This card speaks towards our own truth and honoring what is true in our lives both for ourselves personally, and what can be assessed as a universal truth. Upright, it's key indicates speaking this truth, and bringing your voice to the truth so that it can be known and shared by all. In reverse, this card indicates being silent with the truth, and holding and resonating it internally - for it may not be the best time to speak the truth yet, but allow it to be fully known inside before bringing a voice to it.

We must be reminded then when pairing these ideas together, Ain Soph with Truth, that there are an infinite and boundless number of things we can say, whether they are nonsensical or filled with deep intrinsic wisdom, and ultimately, it is in the ability to listen that we truly learn what is True and what is not. This is perhaps the greatest secrets behind this card - it is in the silence that the action we undoubtedly take is to listen. In this reception, we may discern and weigh concepts against each other to comprehend their value and see where they fit in relationship to each other.