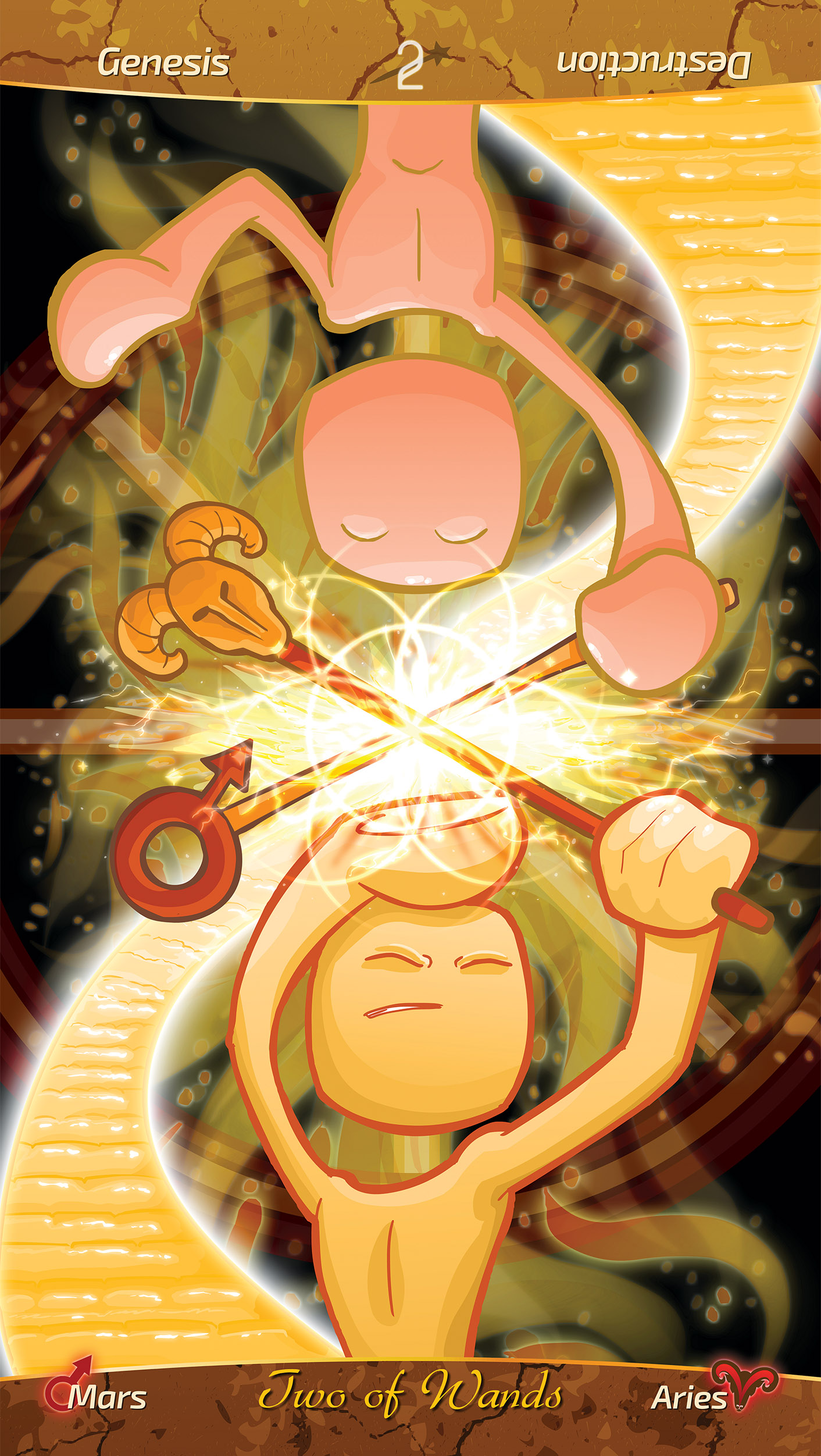 The Two of Wands is the purest manifestation of fire, one that goes in all directions toward a multitude of potentials and yet has no fixed pathway. The two characters display the two reactions to this creative light; first to oppose its sheer intensity, and then to embrace it through the realization of its nature. Both are natural, and ultimately a part of the same experience of light.

The purest and first true manifestation of Fire, the Two of Wands embodies the burning creative will that is present and manifest within you. This fire is both destructive and creative in that destruction is often the first step in the creative process. Once the will has been surrendered to, the invitation is set to move forward into embodying this ultimate Truth.

The Two of Wands is that initial spark of fire which now begins to manifest as an actual substance and embodies the purest representation of the element itself. Where the Ace held the possibility but no true direction, the Two of Wands now has movement and direction, but no end or definitive purpose just yet. It radiates out in every direction, like the light from a lit candle. Without a fixed pathway, every avenue of creation is available and you have every opportunity to decide which path to walk.

The card depicts two characters reacting to the bright light exploding out of the center where their two wands cross. One of them resists the intensity of it, and the other embraces it openly. This describes a fundamental aspect of creation and can be observed in a plethora of ways all the way down to our basic biology. For example: When a sperm reaches the egg, the egg resists it as if it was being attacked. However, once the seed penetrates the egg, the egg experiences an understanding of the union of their geometric blueprints and embraces the metamorphosis completely. This is exactly what is being described on this card; the initial resistance, followed by the embrace of Truth.

It's up to us to decide how we want to react, create and grow in our lives. We can resist the growth, or accept and flow with it, and doing both is quite natural. Both aspects create change within us and are simply a matter of what type of change we will experience.

Behind these two characters can also be seen as a yellow brick road, unfolding from the light. This reminds us that the light is the beginning of a long and joyous journey home, both into and away from Source.

This card invites us to look at the new ideas, inner truths, and understandings that are coming to us at this time. It's now up to you to decide how you want to move forward with this information, and where you want to go. Face your inner vision and step forward to pursue your dreams!

This card does not take into consideration stresses or worries about other things going on but instead comes up with a bit of recklessness yet great strength; which can be very valuable when beginning a new project. Let the details iron themselves out as the project is refined, and don't worry so much about making it perfect from the very beginning. The idea is perfect, and that's what truly counts. With that said though, it would be advisable to take at least some care, so as not to destroy the other energies surrounding you by the sheer intensity of this new light.

This is the time to move into your power; let go of your expectations and flow with the natural progression of what is already moving through you. The Ace of Wands reminds us to not struggle or resist the intention of your heart, for a deeper understanding will cause you to shift and embrace it for what it is.

The reversed side of the Two of Wands is the destruction of the created energy. When the Two of Wands is reversed, it may look like the inhibition of the creation that was moving through - ceasing its activity or even may herald the death of the creation which has already come to be. This was the new thing which was in the process of becoming but is not right or being blocked, and thus is no longer happening. Practically speaking, a lack of planning can also be observed in the reversal of this card, for rushing in headstrong without being mindful of the general direction you are going can lead to the same lack of creation described above.

To turn this reversed card upright, simply remember that the light shines continuously within you, no matter what experiences you have. Sometimes trying to go too fast can lead to this aborted energy, and so slowing down and moving with purpose will enhance the potential for genesis! Also, if you are afraid of aborting this energy, a very healthy practice can be just getting started, without focusing on any potential end result. For example, if you are trying to start a project and you have the creative drive, but are conflicted because you are afraid that it might not turn out as you are picturing it - by just getting started you can continue refining it as you go, and start sculpting this project into what is truly in your heart; don't be afraid of "stopping and starting" repeatedly because each attempt will get you closer to where you're heading!